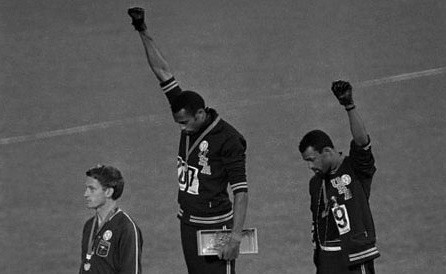 It’s déjà vu all over again. With the 2014 Winter Olympics set to kick off in Sochi, Russia, next February, civil rights advocates are wondering as they did five years ago when the Summer Games took place in Beijing, why the International Olympic Committee has such an affinity for ruthless dictatorships.

Among other human rights violations, Russia recently signed into law a “bill banning ‘propaganda of nontraditional sexual relations’,” as CBS News describes it, which set off a wave of anti-gay violence there. That, naturally, has led to calls to boycott the 2014 Games, most notably from English actor Stephen Fry, who compared holding the Olympics in Sochi to “the stain on the Five Rings that occurred when the 1936 Berlin Olympics proceeded under the exultant aegis of” Adolph Hitler.

It’s controversial, of course. As Pres. Obama said last week, “We’ve got a bunch of Americans out there who are training hard, who are doing everything they can to succeed.” But whether or not you favor a boycott of the Sochi Games, can we at least dispense with the idea that the Olympics aren’t political in nature? Because they are, and always have been.

As an initial matter, the very goal of the Olympics is political. Scott Blackmun, Chief Executive of the U.S. Olympic Committee, described it this way: The Olympics, he said, “unite the world and break down barriers.” That may be laudatory; that may be unusual in the world of politics as we know it; but it is, nonetheless, a political goal: To promote world peace and international understanding. And how do you do that – how do you “unite the world and break down barriers” – when your host country has criminalized the mere acknowledgement that LGBTQ people exist?

More than that, though, a brief trip through history demonstrates that you cannot bring groups of people together to root for athletes based on national affiliation without politics, laudatory or otherwise, entering into the picture. Most of us are familiar with the 1936 Games in Berlin and the outstanding achievements of U.S. Track and Field athletes like Jesse Owens and Ralph Metcalfe. But make no mistake about it, to the Nazis, the Olympics were a political event:

The Nazification of all aspects of German life extended even to sport. A staunch Nazi close to Hitler, Hans von Tschammer und Osten, headed the Reich Sports Office, which oversaw all sports bodies and clubs, including the German Olympic Committee planning the 1936 Games.

“German sport has only one task: to strengthen the character of the German people, imbuing it with the fighting spirit and steadfast camaraderie necessary in the struggle for its existence.” — Joseph Goebbels, Minister of Propaganda, April 23, 1933

The government harnessed sport as part of its drive to strengthen the “Aryan race,” to exercise political control over its citizens, and to prepare German youth for war. “Non-Aryans” — Jewish or part-Jewish and Gypsy athletes — were systematically excluded from German sports facilities and associations. They were allowed marginal training facilities, and their opportunities to compete were limited.

And while the U.S. declined to boycott the Berlin Olympics, it was impossible not to see political significance in Jesse Owens’ four gold medals that year, which debunked the Nazi theory of Aryan physical superiority. Sadly, however, few people realize that the U.S. Olympic Committee did, in fact, cave to Nazi pressure by dumping the only two Jewish athletes on the U.S. Olympic team – Jewish athletes who would have run with Jesse Owens in the 4-by-100 meter relay.

Nor did the confluence of politics and the Olympics end with the Berlin Games. For example, in 1968, African-American track stars Tommy Smith and John Carlos famously raised the Black Power salute on the medals stand at the Mexico City Olympics, an act of protest that got them banned from the Olympic Village by the IOC in one of those classic moments of political schizophrenia: They were punished for making a political statement, largely because IOC president Avery Brundage (who, as it turns out, was president of USOC when we decided to participate in the Berlin Olympics 32 years prior) didn’t like the political statement they were making. Tommie Smith aptly summed up the situation this way: “If I win, I am American, not a black American. But if I did something bad, then they would say I am a Negro.”

That same year, when Czechoslovakia played the USSR in ice hockey at the Winter Olympics in Grenoble, politics clearly were in the air. Though the Soviets would go on to win the gold medal, the Czechs beat the Russians 5-4 in the second to last round, in a game that was historical both in terms of its ferocity and its result.

Tell the Czech people there’s nothing political about the Olympics. Eighteen years later, after the downfall of the Soviet Union, the Czechs finally defeated the Russians to win the gold in Nagano, Japan:

In the predawn chill – the game started at 5:45 A.M. [Prague] time –70,000 Czechs stood shoulder to shoulder at the base of a bronze monument or perched on the narrow window ledges of surrounding Baroque buildings. The spectators craned their necks to watch the game on three massive screens specially erected in the square.

They erupted in joy when the Czech team defeated the Russians, 1-0. It was the only gold medal won by the Czechs in Nagano, so a victory over any country would have been worth cheering. But, of course, beating the Russians meant more.

“When we compete against the Russians, it is more than just sport,” said Linda Pavckova, 23, a newspaper sales representative. “It is political.”

Then, too, there were the 1972 Summer Games in Munich, in which nine Israeli athletes were kidnapped by Palestinian extremists and were eventually killed in a shootout at the Furstenfeldbruck air base; the highly controversial gold medal basketball game between the U.S. and the Soviet Union, also in 1972, which remains one of the most hotly debated, and undeniably political, sporting events in U.S. history; the widespread African boycott of the 1976 Olympics in Montreal; the U.S. boycott of the Moscow Olympics in 1980, followed by the Soviet boycott of the 1984 Summer Games in Los Angeles; and the IOC’s controversial decision to award Beijing the 2008 Summer Games.

So the question isn’t, should the Olympics be political? They are, by their very nature, and the IOC, by scheduling the Olympic games in places like Berlin in 1936, Moscow in 1980, Beijing in 2008, and Sochi in 2014, bears a heavy measure of responsibility for politicizing the games. The real question is, since the games are scheduled to take place in one of the most repressive countries in the world, how should we respond?

Dave von Ebers is a graduate of the University of Illinois at Urbana-Champaign (BA ’83, JD ’87), and has practiced business law and litigation in the Chicago metropolitan area for more than a quarter century. After practicing with some of Chicago’s most distinguished law firms, Mr. von Ebers opened his solo practice in Oak Park, Illinois, in 2001. Mr. von Ebers is an established writer and blogger, having written extensively on civil rights, constitutional law, politics, sports and music – and often the intersection of some or all of foregoing – since 2005. Mr. von Ebers joined the award-winning This Week in Blackness team in 2013, and is the co-host of Sportsball with Aaron Rand Freeman and Rachael Parenta.