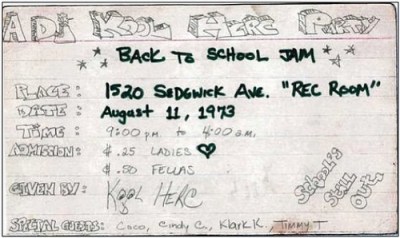 According to pop music Apocrypha, hip-hop was born in the Bronx forty years ago. NPR’s Dart Adams explains:

[August 11, 2013] mark[ed] the 40th anniversary of the day Clive “Kool Herc” Campbell threw his first party in the function room of 1520 Sedgwick Ave in the South Bronx. While that Kool Herc back-to-school party marks the official beginnings of the global culture we call hip-hop, what the mainstream media at large now calls hip-hop” is a far cry from the creative culture that emerged following the gang truce between the warring tribes of the South Bronx. When most people say “hip-hop” what they’re actually talking about is rap. Even then, they’re usually referring to mainstream rap music by rappers on major labels, which are currently experiencing what might be their overall low point in both quality and creativity. Rap was a force that united people, spoke truth to power and entertained at the same time. Now it exists almost solely to maintain the status quo and promote moneyed interests.

So, over on Twitter, HumanityCritic posed the question: What was the first hip-hop record you bought? Which got me to thinking about how I first became aware of the genre, and I realized that I came to it through punk.

It was 1981, when I was a freshman in college, and it was early on in my obsession with the greatest punk band of all time, the Clash. They had just released their fourth full-length studio album, the three-disc Sandinista! LP, to considerable confusion. That is to say, people who hadn’t been paying attention were confused, because from the outset the Clash had never limited their music just to punk. But, anyway, Sandinista! was all over the map, musically speaking, and it included one track in particular – “The Magnificent Seven” – which was, according to the band’s official website, “the first ever rap record made by a British act”:

In retrospect, it’s not too surprising that the Clash, in the waning days of punk, would turn to hip-hop as a source of inspiration. Punk was all about tearing down the stagnant, bloated, overly-indulgent rock music industry as it existed in the mid-1970s, not to destroy pop music but to save it. Punk was all about change, about evolution, and hip-hop was the next logical step in that evolution.

A few years back, journalist and activist Antonio D’Ambrosio discussed that evolution with Joe Strummer, the band’s rhythm guitarist and principal song writer:

Strummer’s unique partnership with Mick Jones, his main collaborator and lead guitarist in the Clash, brought a revolutionary sense of excitement to modern music. Strummer and Jones quickly recognized the power of rap music that was just emerging from New York City’s underground in the late seventies. “When we came to the U.S., Mick stumbled upon a music shop in Brooklyn that carried the music of Grand Master Flash and the Furious Five, the Sugar Hill Gang…these groups were radically changing music and they changed everything for us.”

With typical Clash inventiveness, they became one of the first white groups to incorporate rap into their music. As a tribute to the path-breaking Sugar Hill Gang, the Clash recorded The Magnificent Seven, one of their best-known and most important singles. In another example that marked the Clash’s commitment to challenging social conventions, they enlisted several New York City rap groups to join their huge Clash on Broadway tour. …

Reflecting on the group’s influence, I suggested to Strummer that hip-hop has replaced punk rock as the dominant political pop cultural force in spirit, vitality, and creativity. He responded, “No doubt about it, particularly in respect to addressing the ills of capitalism and providing a smart class analysis, underground hip-hop, not the pop-culture stuff, picked up where punk left off and ran full steam ahead.”

That sounds about right.

Sadly, after the release of Sandinista! the Clash didn’t last much longer. The original line-up released just one more studio album, Combat Rock (1982), and then Strummer’s partner, Mick Jones, left the band.

But hip-hop persisted, and, as Joe predicted, continued to be the source of some of the best political music around.

Dave von Ebers is a graduate of the University of Illinois at Urbana-Champaign (BA ’83, JD ’87), and has practiced business law and litigation in the Chicago metropolitan area for more than a quarter century. After practicing with some of Chicago’s most distinguished law firms, Mr. von Ebers opened his solo practice in Oak Park, Illinois, in 2001. Mr. von Ebers is an established writer and blogger, having written extensively on civil rights, constitutional law, politics, sports and music – and often the intersection of some or all of foregoing – since 2005. Mr. von Ebers joined the award-winning This Week in Blackness team in 2013, and is the co-host of Sportsball with Aaron Rand Freeman and Rachael Parenta.