We hear white people use some version of this excuse all the time: “It’s okay, I have a black friend.” And maybe you do. Or you have a black wife or husband or girlfriend. Or someone in your family is black. But regardless, that’s not a “get out of ignorance free” card. A supporter of Syracuse student-athlete Hannah Strong tried to use the excuse that she hung out with a lot of black people so it made this okay:

Over the weekend, a video was posted of Syracuse University student-athlete Hannah Strong, who is white, shouting the double-barrel slur(s) “faggot-ass nigger” at someone off camera before telling them not to record her and calling them “nigger” once more. It’s a short, shaky clip that starts with her berating a black man who has his hands in the air for some reason, and it is no understatement to say it’s unclear from the video what was going on there, with the one exception that she definitely used two of our most hateful slurs.

We bet she had a lot of gay friends, too.

Team Blackness also discussed the Oscar Pistorius verdict, the failings of fat shaming, and a woman with a strong affinity for her spaghetti strainer. 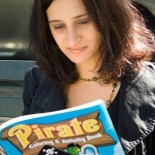